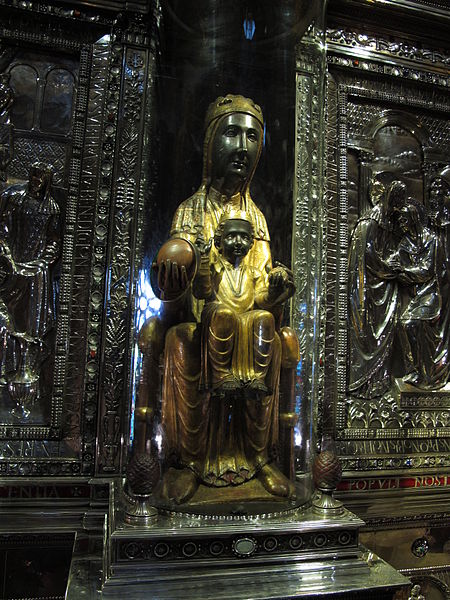 The Virgin of Montserrat

The Virgin of Montserrat (Catalan: Mare de Déu de Montserrat or Moreneta) is a statue of the Virgin Mary and infant Christ venerated at the Santa Maria de Montserrat monastery in the Montserrat mountain in Catalonia. It is one of the black Madonnas of Europe, hence its familiar Catalan name, la Moreneta (“The little dark-skinned one”). Believed by some to have been carved in Jerusalem in the early days of the Church, it is more likely a Romanesque sculpture in wood from the late 12th century.[1]

The mountain of Montserrat has been of religious significance since pre-Christian times, when the Romans built a temple to honor Venus.[2]

By one account, the image of the Madonna was moved to Montserrat in 718, to avoid the danger posed by invading Saracens.[3]

Legend has it that the Benedictine monks could not move the statue to construct their monastery, choosing to instead build around it. The statue’s sanctuary is located at the rear of the chapel, where an altar of gold surrounds the icon, and is now a site of pilgrimage.

In 2001 renovators working for the government observed that the black hands and face of La Moreneta, had over the centuries undergone a change in colour. They attribute the change either to prolonged exposure to candle smoke or a chemical reaction caused by a varnish used as a paint sealant. The statue was repainted black by successive generations of restorers. A series of tests, including X-rays, revealed the statue’s original colour and also showed that the last repainting took place at the turn of the 18th century.[4]

Upon his recovery from battle wounds, Ignatius of Loyola visited the Benedictine monastery of Montserrat (March 25, 1522), where he laid down his military accouterments before the image.[3] Then he led a period of asceticism before later founding the Society of Jesus.

On September 11, 1881, Pope Leo XIII declared the virgin of Montserrat patroness of Catalonia (Saint George is another patron saint.)

The hymn to the Virgin of Montserrat, known as Virolai and sung every day by the Escolania de Montserrat, begins with the words:“Rosa d’abril, Morena de la serra…” (April rose, dusky lady of the mountain chain…). Therefore this virgin is sometimes also known as “Rosa d’abril”.[5]

The statue has always been considered one of the most celebrated images in Spain. However, like Our Lady of Einsiedeln in Switzerland, its popularity is primarily regional.[3] “La Moreneta” is Catalonia’s patron saint.[4]